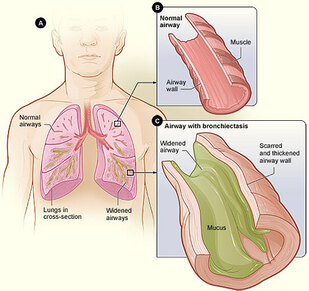 Cystic Fibrosis is described as a classic example of chronic inflammatory disease. Bronchiectasis, the main characteristic of CF lung disease, is the result of out-of-control inflammation. It is described as the over-dilation of our airways to the point where they lose their elasticity and scarify. This causes the airways to become fragile and increases the risk of them collapsing or breaking, which can lead to hemoptysis (bleeding of the bronchial arterioles into the airways leading to coughing up of blood). Our airways over-dilate in part because they are filled with mucus, and in order to move any air through a clogged up airway they must widen themselves. But bronchiectasis is also caused by neutrophilic inflammation and the airway scarification and restructuring that results.

The inflammatory processes that cause bronchiectasis are complicated and not fully understood, but much of the problem has to do with over-recruitment of neutrophils into the airways. Neutrophils are white blood cells that are part of the innate immune system and their job is to kill pathogens and help clean up infection or tissue damage. Under normal circumstances, these guys are wonderful and target infection quickly, clean it up, then move on. But in situations of chronic infection, neutrophils (NTs) never really move on. In CF, the situation is even more complex. It turns out that CF lungs have higher than normal levels of NT elastase (an enzyme that NTs use to kill pathogens and break down tissue) even without pathogenic colonization [1,2]. We don't know why this is for sure, but I postulate that it is a result the Th2 part of the acquired immune response becoming dominant, which is linked to allergies and autoimmunity. The Th1/Th2 response can be rebalanced with a diet low in modern, processed foods and high in anti-inflammatory foods and phytochemicals found in wild plants and herbs. Neutrophils and the inflammatory mediators that they secrete (e.g. NT elastase, IL-8) cause further neutrophil recruitment, tissue damage, and airway remodeling (i.e. bronchiectasis) [1]. It has been found that the greater the level of NT elastase in CF sputum, the lower a person's FEV1 will be [3]. Not only does NT elastase break down the elastin, collagen, and proteoglycans in the tissue of our airways, but it also makes our mucus thicker and harder to expel. This is a problem because thick mucus provides an even better home for pathogens to breed. In addition, thick mucus makes it harder for the NTs to move around in the airways, so they get stuck, die, and cause mucus pooling. Airways widen even more to get around the mucus pooling, causing further bronchiectasis. Pulmozyme (DNAase) works by breaking apart neutrophil elastase in the airways, making the mucus thinner and easier to cough out.

Another problem with neutrophilic inflammation in CF is that although the NTs are called in to kill pathogens, they don't actually do a very good job cleaning up infection, and when they release cytokines and ROS, the body has a reduced ability to neutralize that oxidation with its own antioxidants. In CF, epithelial cells have a hard time secreting glutathione (our most prevalent antioxidant) into extracellular space because of the faulty CFTR channel, so neutrophil free radicals are not quenched effectively. Furthermore, it's been found that in CF the neutrophils themselves have low glutathione (GSH) reserves. Because there is a lack of native antioxidants in CF, and because neutrophils that try to kill bacteria behind their biofilm fortresses are ineffective and produce increased amounts of ROS, neutrophils have more of a negative effect on the CF lung than a positive one [4]. Several studies have looked into reducing systemic inflammation by boosting neutrophil GSH levels with NAC supplementation. N-acetylcystine (NAC) is a molecule necessary for the synthesis of glutathione in the body, essentially being a glutathione precursor. Direct supplementation with glutathione is largely ineffective because it is easily oxidized (and neutralized) by environmental factors. It's been shown that oral supplementation with NAC increases NT glutathione in the lungs, and also reduces neutrophil recruitment to the site of infection in the lungs. Oral NAC significantly reduces IL-8 (an inflammatory marker) in the airways, and significantly reduced NT elastase in the sputum [3]. This means that instead of dealing with systemic inflammation through palliative treatments like steroids, high-dose ibuprofen, and azithromycin, NAC supplementation can help address the root of the problem with a completely harmless treatment that has virtually no side-effects and no known level of toxicity! A small pilot study showed that high dose oral NAC (2400mg per day) was safe and increased systemic levels of the antioxidant vitamin C [4]. A larger multi-center study on oral NAC in CF using PharmaNAC showed that after 6 months at a dose of 900mg 3xday, patients' lung functions were prevented from declining or were improved compared to placebo [5]. That said, I do not believe NAC to be a cure-all, though it may help reduce CF lung inflammation. Efficacy will vary from person to person. A standard dose for oral NAC is 600 mg three times a day. It is very cheap over the counter, but your doctor may also be able to write you a prescription for it. It is used in modern medicine to treat acetaminophen (tylenol) poisoning and interstitial lung disease. There is a lot of interest in the CF community about a supplement called PharmaNAC, which is a powder containing NAC that can be added to drinks. Some of my clients have said it has helped thin their mucus.

The liver is the body's major producer of glutathione. Milk thistle seed contains silymarin, a phytochemical that triggers epigenetic changes that cause the liver to produce more glutathione. In fact, one unit of silymarin causes the liver to produce ten units of glutathione! That's more efficient than taking NAC! Studies have not been done to see if milk thistle has a positive effect on increasing neutrophil GSH or reducing neutrophil recruitment, but theoretically, it could be possible. I take milk thistle everyday for this purpose and for general liver support. I also want to mention that there is an older inhaled drug out there called Mucomyst, which is inhaled NAC. It breaks the disulfide bonds in mucus, making it more liquidy and easier to cough out. It does not, however, increase GSH levels in the lungs because in order for NAC to be converted to GSH, it has to be metabolized in the liver. Only oral NAC can increase systemic GSH levels in the body, because oral NAC is absorbed through the intestines, metabolized by the liver, then circulated in the blood.

Given all this, I have decided to focus on improving my lung symptoms by targeting inflammation and reducing the amount of inflammatory substances I put into my body by cleaning up my diet. I struggled with bouts of significant hemoptysis for several years, and had a pulmonary embolization in May 2013. I have noticed that I get hemoptysis when I am particularly inflamed, caused either by a bad lung infection, inflammatory foods, and/or environmental irritants (e.g. campfire smoke or heavy pollen). Thus, in addition to adhering to an ancestral diet like Paleo, I got my doc to give me a prescription for NAC, and I take many herbs that help me reduce my level of systemic inflammation.

Next Section: The Microbiome: Your Gut and Immunity