Inflammation and Infection - Chicken or Egg? 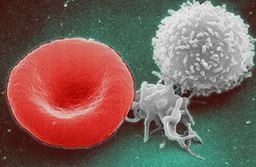 Red and white blood cells.
If you have not already read the introduction (CF 201) click here.

Inflammation is an important contributor to an increased mucus load. There are special cells scattered throughout the epithelial linings of certain organs (lungs and digestive tract in particular), called goblet cells, that secrete mucin (the main constituent of mucus). When goblet cells detect pathogens nearby, they secrete more mucin in order to try to flush them away and out of the body. But in CF, our little cilia are not working and our cells are not secreting enough water to combine with that mucin to thin it out, so those goblet cells are just making the problem worse! Furthermore, in bronchitis and chronic lung infections, the number of goblet cells in the airways increases! Now we've got too much thick, sticky mucus on our hands in addition to whatever pathogens the immune system detected. Soon we've got clogged up lungs and an infection brewing. Not good. Goblet cells can also be triggered to secrete more mucus if they detect toxins or allergens in the airways such as pollution, cigarette smoke, or compounds that the immune system has inappropriately created antibodies against.

Interestingly, the intestines also secrete mucus as part of their normal functions, but they secrete excess mucus when they encounter pathogens and allergens in the gut, or irritating/hard-to-digest foods. Both the lungs and the digestive tract are innervated by the vagus nerve, and so when the guts are producing excess mucus due to digestive irritation, mucus secretion will increase in the lungs as well. Therefore, eating inflammatory or difficult to digest foods can increase lung mucus! Have you ever noticed that certain foods make your nose run or your lungs produce more mucus? I have, and so have many of my clients. This is a naturally physiological response to digestive irritation, but unfortunately few mainstream doctors are aware of this connection and may dismiss it when their patients explain this to them. In fact, there is a method of herbal application called acupharmacology that exploits this vagus nerve connection between the guts and lungs to sooth and calm the airways! This is essentially how elecampane can increase respiratory expectoration, or how marshmallow root tea can sooth a dry, hacking cough.

Mucus production is a non-inflammatory immune response. It is our first line of defense against pathogens and irritating particles. But if pathogens or allergens are not cleared away, the body will mount either of two immune responses that are inflammatory: 1) an innate immune response mediated predominantly by neutrophils, and 2) an acquired immune response mediated by antibody creation (like IgE) and detection by B cells and T cells. These inflammatory responses may kill pathogens, but they also cause fever, swelling, heat, and pain. And when there is chronic infection, white blood cells are more likely to get over-excited and begin damaging our own tissue cells too, usually by accident. When pathogens or our own cells are being destroyed by white blood cells, particles of that tissue can get into the blood, triggering a further immune response. Furthermore, when a type of leukocyte (white blood cell) called a neutrophil gets called in to kill infection, in CF these are not very effective (in large part because they lack enough of our body's primary antioxidant called glutathione [1]) and die in huge numbers, signaling more neutrophils to be called in to clean up the mess, which makes the whole situation worse.

Neutrophils also secrete an enzyme called neutrophil elastase that can break down the proteins that make up our airways, leading to airway remodeling and destruction. Even though it's true that infection causes inflammation, it may be a more complex situation than that. One well-known study documented that CFers had high levels of inflammatory markers even before their infections with pseudomonas became significant. In other words, there is evidence that inflammation makes CFers more susceptible to infection [2]. Chicken or egg? A higher basal level of inflammation has many cascading systemic effects, but in relation to infection or allergy, it can make the immune system hyper-responsive, which can cause worsened airway destruction and prolonged recovery time. Inflammatory responses cause the release of oxygen free radicals or "reactive oxygen species"/ROS (those things that antioxidants neutralize), which cause further tissue damage, and can even cause pseudomonas to mutate into more harmful strains! Yikes! Some pathogens prefer an inflamed tissue environment to colonize. Chronic inflammation can lead the acquired immune response to shift to a more hyper-inflammatory state (i.e. a shift from Th1 to Th2, which I will discuss in the next section).

Elevated basal levels of inflammation in CF are due in part to faulty CFTR function. Intracellular antioxidants which reduce inflammation, such as glutathione and superoxide dismutase, cannot move out of the cell in sufficient quantity because the mutated CFTR cannot push them out, leaving the space outside of the cells more vulnerable to damage by oxidation/ROS. In addition, the faulty CFTR cannot move critical antimicrobial chemicals (such as hydrogen peroxide) out of the cell to mount a proper immune response when confronted with pathogens. This means that people with CF have a reduced ability to properly neutralize oxidation, and also have less effective cell-mediated immune responses [3]. Furthermore, CF lung fluid is known to be excessively acidic due to inadequate bicarbonate release by CFTR channels in the airways [4]. Excessively acidic airways prevent proper immune responses to infection, and bicarbonate is a key component in keeping mucus thinned out [5]. The CF community is now experimenting with inhaled bicarbonate, and some are having very good results. Researchers are also trying to find ways to block the proton pumps in the airways.

The discovery that CFers have a higher baseline level of inflammation prompted the experimentation in CF clinics with administering high-dose ibuprofen at a young age, before infection became significant, and also other anti-inflammatory drug therapy such as steroids (i.e. prednisone). But both of these drugs have harmful side effects. Ibuprofen can cause stomach ulcers, and steroids essential dampen or shut down part of the immune response, which would of course inhibit our natural ability to fight infection--not a good idea! A better long-term solution is to eat foods, take supplements, and use herbal medicine to regulate the harmful aspects of the immune dysregulation while boosting the beneficial aspects of the immunity. These foods I will outline in the What to Eat section.

Whole foods and herbs can be more helpful long-term with fewer negative side effects than some pharmaceuticals. Many immunological pharmaceuticals suppress all immune responses indiscriminately, the good and the bad. We need our immune system to help us fight off infection, so we need to be more precise and respectful when dealing with our immune system. It's a precious tool, let's nurture it!

More and more research shows that gut flora play a huge role in regulating the immune system, and an imbalance in the flora (called dysbiosis) can lead to inappropriate immune responses, indigestion, and chronic inflammation. By eating more healthfully and rebalancing our gut flora, we can reduce markers of systemic inflammation, benefiting the entire body. Therefore, the decisions we make about what we eat can have a huge impact on our overall inflammatory load. This is good news! It means we have the power to control certain aspects of our health with simple, natural solutions.

Next section: Bronchiectasis and Inflammation